The global cooking oil market was valued at $190.3 billion in 2021 and it is expected to reach $320.3 billion at a CAGR of 4.7% between 2022 and 2032. Due to the rising demand among a large number of people who have become health conscious, and increasing demand in various application and cooking industries, the market is projected to witness several growth opportunities over the upcoming years.

By region, Asia-Pacific has led the global cooking oil market with significant share over the past few years.

Cooking oil can help people to maintain their diet balance. It could also help an individual to fulfill approximately 30% of the required dietary intake for vitamins A and D. The actual method of fortification started in the Asia-Pacific region especially in India due to an increasing deficiency of vitamins A and D in children. Hence, the rising demand for fortified cooking is estimated to fuel the global cooking oil market throughout the upcoming years. Furthermore, in several countries health, conscious people are focusing on consuming foods that are not only tasty but have several nutritional benefits. This is one of the major factors which are driving the market growth. Moreover, urbanization is developing across several nations such as India, China, and Indonesia, among others, which have shifted the consumer’s choice toward processed foods. Hence, the taste of people is also changing due to the fast-moving lifestyle. Additionally, the distribution network is also expanding across several regions and it is likely to significantly contribute to the sales of the global market. These major factors are anticipated to accelerate the growth of the market over the forecast period from 2022 to 2032. 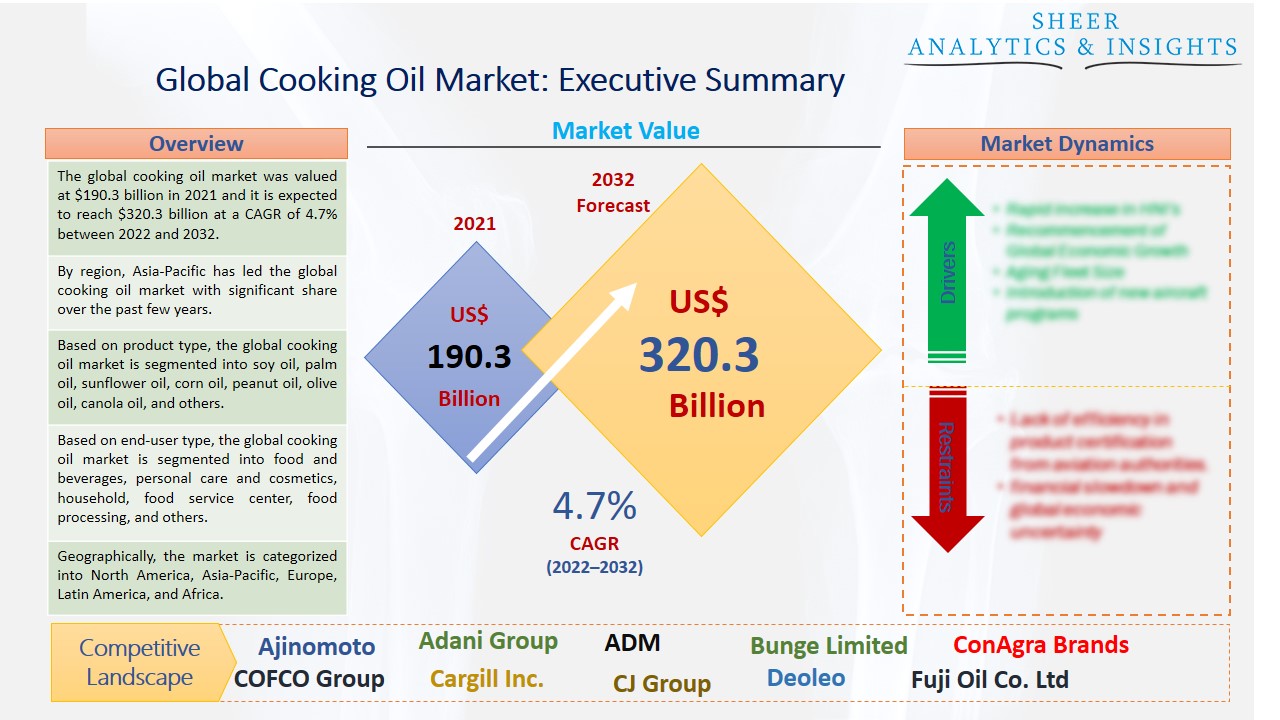 Based on product type, the global cooking oil market is segmented into soy oil, palm oil, sunflower oil, corn oil, peanut oil, olive oil, canola oil, and others. The soy oil segment holds the largest share of the market and is anticipated to lead the global cooking oil due to its rising usage in cooking such as baking, frying, and roasting. It is highly refined and rich in heart-healthy fats. It may support bone health and contains omega-3 fatty acids. People, who are conscious of their skin health, take this oil. On the other hand, palm oil is another segment that is expected to witness several growth opportunities due to its wide usage in several regions such as Asia-Pacific, Africa, and Latin America. Palm oil is a great source of vitamin E. It is rich in antioxidants and is very essential for keeping the immune system healthy. Along with this, canola oil is also estimated to lead the market due to its rising usage. It is also affordable and very healthy and is available both for commercial sale and at home.

Based on end-user type, the global cooking oil market is segmented into food and beverages, personal care and cosmetics, household, food service center, food processing, and others. The household segment holds the largest share of the market and is anticipated to lead the global cooking oil market with a significant share due to the increasing usage of branded cooking oil. Moreover, due to the growing usage of branded cooking oils in urban places across several nations, the market is expected to witness more growth. People who want to maintain good health use several branded cooking oil which would benefit the whole market. On the other hand, the food service sector is the fastest-growing category among other segments. Additionally, due to the increasing establishments of restaurants across multiple nations, the market has witnessed some growth. Manufacturing companies are also focusing on producing more cooking oils which are healthy than conventional oils.

Geographically, the market is categorized into North America, Asia-Pacific, Europe, Latin America, and Africa. Among these, the Asia-Pacific region holds the maximum share of the market and it is expected to hold its dominant position during the forecast period. Most of the key players are situated in this region which is focusing on implementing new business growth. These companies are developing new partnerships with other manufacturing companies to create innovative cooking oils for health-conscious people. In addition, consumers from this region are becoming interested in foods that are both healthy and tasty. This is estimated to drive the growth of the market. Along with this, North America is another market that has grown rapidly over the last few years. The region has witnessed several growth opportunities due to increasing demand for multiple processed ready-to-serve foods with the consumption of edible oils. Therefore, these major factors are expected to propel the growth of the global cooking oil market during the forecast period from 2022 to 2032.

The Global Cooking Oil Market Has Been Segmented Into: