The global flip flops market was valued at $18.6 billion in 2021 and it is expected to reach $42.1 billion at a CAGR of 7.6% between 2022 and 2032. This footwear is very lightweight and portable, which is also increasing demand for them all over the world. Additionally, rising consumer disposable income levels and ongoing product advancements are anticipated to drive this market's expansion. On the other hand, voicing objections to environmental degradation and the use of hazardous and non-disposable materials in the production of goods may impede market expansion.

Flip Flops are a particular kind of footwear that is frequently worn for casual attire. They consist of a flat sole that is loosely fastened to the foot by a Y-shaped strap called a toe thong that wraps around both sides of the foot and between the first and second toes. A flip-flop is additionally typically described as a light shoe used indoors. Between the big toe and the second toe of these shoes is a Y-shaped strap known as a thong. Typically, flip flops feature a flat sole that is only lightly secured by the straps. 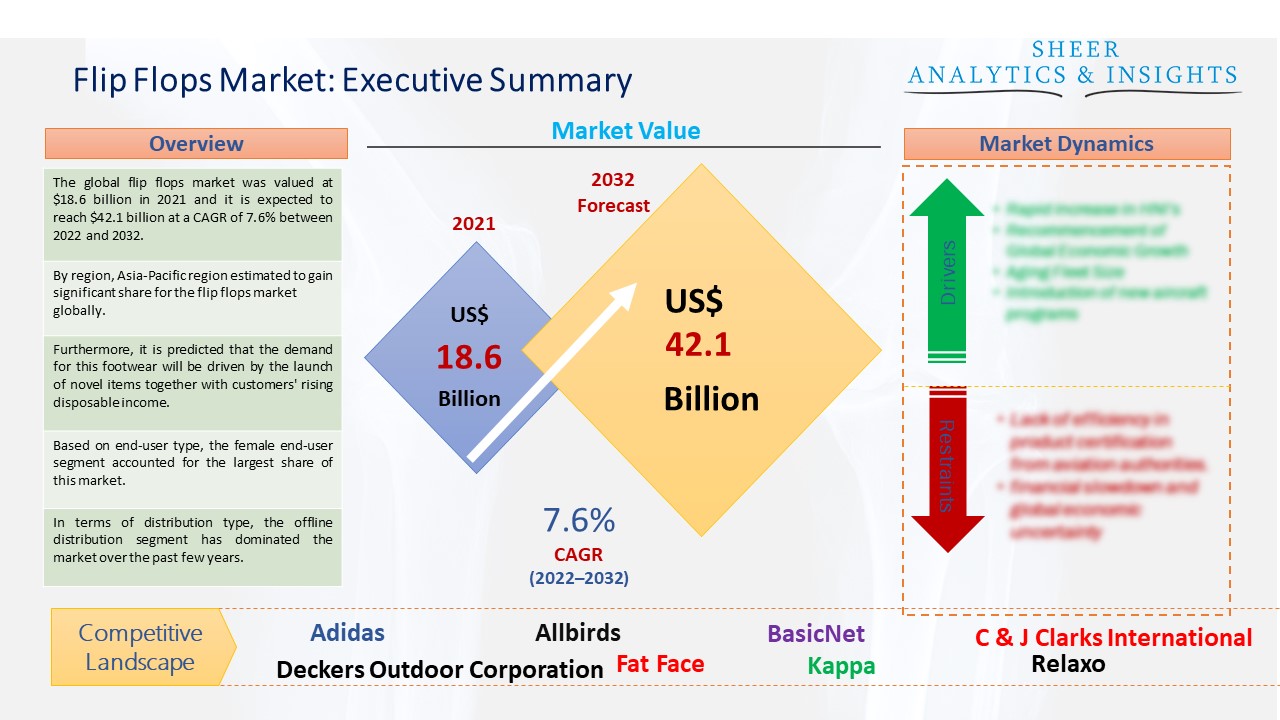 Furthermore, it is predicted that the demand for this footwear will be driven by the launch of novel items together with customers' rising disposable income. However, as customers become more aware of the negative effects of these items, increased environmental concern is anticipated to be a limiting factor in market expansion. Additionally, the market expansion is hampered by the environmental disadvantage of Flip Flops caused by the poor EVA recycling rate. Since the epidemic, flip-flops have become more popular, and formal shoes have lost ground as more people choose to work from home. The market now has the chance to generate more money.

The rise in consumer disposable income levels and ongoing product innovations are key factors anticipated to boost the growth of the flip-flops market during the forecast period. Furthermore, the market for flip flops is expected to develop as a result of the expanding concerns about environmental contamination and the use of hazardous, non-disposable materials in product manufacturing. Flip-flops, on the other hand, might be cozy in the short term, but their greater health cost is further anticipated to limit the expansion of the flip-flops market in the timeframe period.

The increased disposable income of consumers, followed by the swift population growth around the world, are the main reasons driving demand for flip-flops globally. The manufacturers are investing in R&D activities for the creation of eco-friendly flip flops as a result of the growing environmental concerns, which would positively affect the market's rising demand. Additionally, the expanding indoor and outdoor usage of flip flops as well as style addiction will likely create more prospects for the industry to expand in the years to come.

In terms of distribution type, the offline distribution segment has dominated the market over the past few years. In the ensuing years, it will continue to increase at the same rate. The growth of the segment will be fueled by the expansion of offline distribution channels in growing nations, such as hypermarkets and brand stores. However, internet distribution channels make up the market segment that is expanding the fastest. Because of factors such as increased digital penetration, doorstep delivery, a large selection of products, and others, the market share of online sales has been continuously increasing. Additionally, category growth is being supported by the developing economies' quickly growing e-commerce sector.

Geographically, the Asia-Pacific region has dominated the market and is also expected to hold its dominant position during the forecast period from 2022 to 2032. The increase is attributable to consumers becoming more aware of current fashion trends. Over the anticipated period, North America is anticipated to have the fastest rate of growth in this area. On the other hand, due to a wide range of product availability and product advancements, North America is anticipated to grow at the greatest CAGR throughout the projection period. Market expansion in this region is anticipated to be fueled by the launch of cutting-edge products and the accessibility of a wide range of products.

The Global Flip Flops Market Has Been Segmented Into: