The global hydrogen fuel cell market was valued at $1.9 billion in 2021 and it is expected to reach $70.8 billion at a CAGR of 40.3% between 2022 and 2032. Growing demand in the telecommunications, automotive, and residential micro-CHP sectors, as well as a reduction in reliance on non-renewable energy sources, are some of the drivers driving market expansion.

By region, North America has been leading this market with significant growth over the past few years.

Growing demand in the telecommunications, automotive, and residential micro-CHP sectors, as well as a reduction in reliance on non-renewable energy sources, are some of the drivers driving market expansion. However, a lack of hydrogen refueling stations and the high cost of adopting this technology are limiting industry expansion. However, in other words, a hydrogen fuel cell is an apparatus that converts hydrogen and oxygen into the water while simultaneously generating energy. In a hydrogen fuel cell device, chemicals are continuously pumped into the cells, preventing the battery from running out. Vehicles, portable power units, and power generation all employ hydrogen fuel cells as an alternative fuel source. 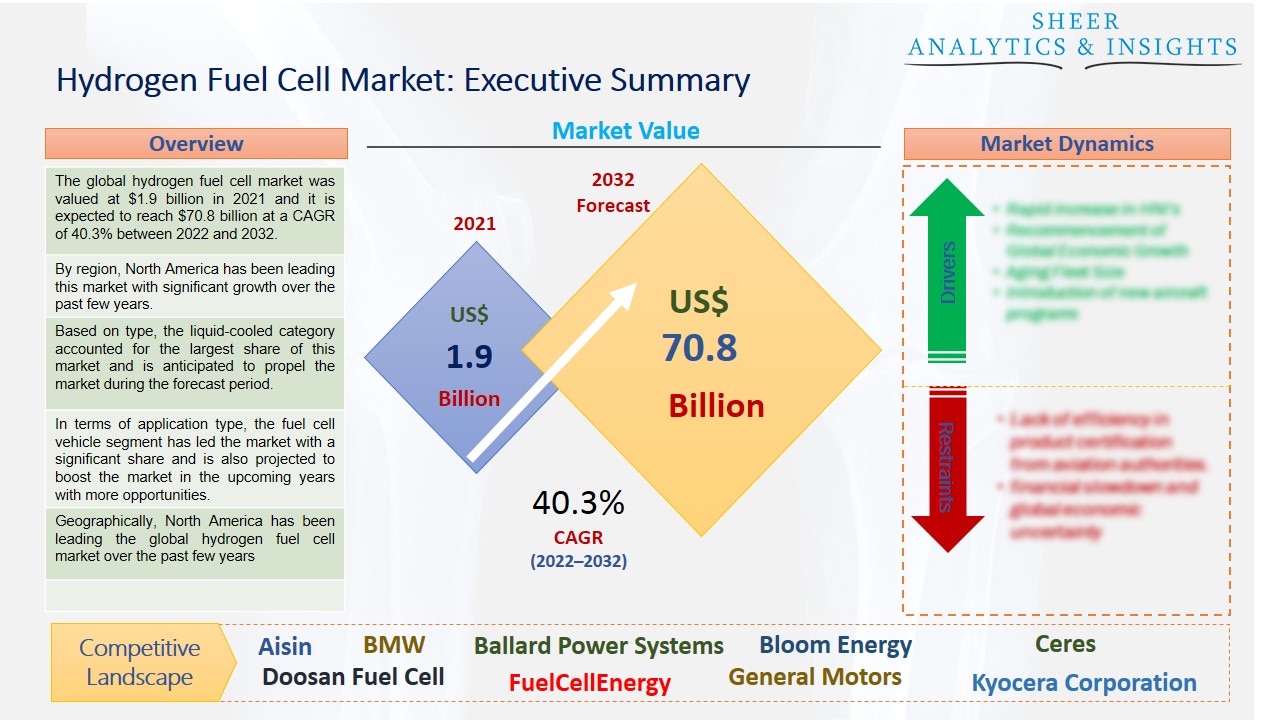 Furthermore, the size of the electric motors that get electric power from the suitably sized fuel cell and battery combination defines the power of the vehicle during the vehicle design phase, according to the vehicle manufacturer. In addition, a hydrogen fuel cell generates electricity using the chemical energy of hydrogen. It is a clean kind of energy, producing just electricity, heat, and water as waste. Compared to conventional combustion-based solutions, fuel cells provide benefits including higher efficiency and reduced pollutants. There are no carbon dioxide emissions or other pollutants emitted into the atmosphere because hydrogen fuel cells only emit water. Since they have fewer moving parts than combustion technologies, fuel cells are also silent when in use.

A chemical reaction is used to produce electricity in hydrogen fuel cells. A negative anode and a positive cathode are the two electrodes found in each fuel cell. Leading industry players work to increase their understanding of process improvement at scale to produce greener goods with improved performance and lower total cost of ownership. To increase their competitive position in the market, they start several strategic initiatives, including mergers and acquisitions, collaborations, expansions, and technology launches.

Based on type, the liquid-cooled category accounted for the largest share of this market and is anticipated to propel the market during the forecast period. In comparison to air-cooled types of cooling, liquid-cooled cooling provides more cooling. Compared to other cooling methods, condenser cooling enables the fuel cell stack to operate at higher temperatures. This can be accomplished by integrating PEMFC into the transportation industry, whose efficiency can be extracted through PEMFC stack liquid cooling optimization.

In terms of application type, the fuel cell vehicle segment has led the market with a significant share and is also projected to boost the market in the upcoming years with more opportunities. Furthermore, a rapidly growing market for fuel-cell electric car technology is predicted to be dominated by China, Japan, and South Korea. Furthermore, it is anticipated that government subsidies for FCEVs throughout Asia-Pacific, especially in China, Japan, and South Korea, will spur private sector investment and boost the development of FCEV technology. However, the stationary segment is also estimated to lead the market growth with more growth opportunities in the future. Due to features including high efficiency and the ability to use a variety of fuels, the stationary application sector is anticipated to develop and become the most popular application throughout the projected period. The acceptance of stationary fuel cells has rapidly increased in both professional and academic environments.

Geographically, North America has been leading the global hydrogen fuel cell market over the past few years and is also expected to hold its dominant position during the forecast period from 2022 to 2032. Most of the key players are situated in several countries across this region which is a plus point for the market. Programs for research and development as well as government incentives and subsidies for fuel cell-based vehicles have helped the fuel cell deployments in North American nations. California's Clean Transportation Program continues to subsidies the construction of hydrogen infrastructure. On the other hand, the Asia-Pacific region is also projected to become the second-largest market in the future. The region's growing population and rising standard of living are driving greater energy demand. Furthermore, the world's biggest polluters are the economies of the region, which are expanding quickly.

The Global Hydrogen Fuel Cell Market Has Been Segmented Into: