The ‘Global Internet of Things (IoT) Sensors Market’ was valued $26.5 bn in 2020 and is expected to reach $304.7 bn at the CAGR of 25.1% between 2021 and 2031. COVID impact was positive on this market and demand of these sensors have increased too. There was a little impact due to transportation hinderance during COVID. But manufacturing companies had tried to cope up with the demand of end user products and projects and had covered the gap in third and fourth quarter of 2020.

By Region, Asia Pacific holds a significant market share of more than 35% in 2021

The Global IoT Sensors has been geographically segmented into North America, Europe, Asia Pacific and LAMEA. At present, IoT Sensors market seems to be fragmented in nature. Around 35% market revenue generation comes from China. As per the primary interviews feedback from one of the key manufacturers, Infineon Technologies dominates the overall market with a share of 13.2% in 2021. This market share is due to company long term tie ups with end user business companies and their technology shifting pace as per industry updates. 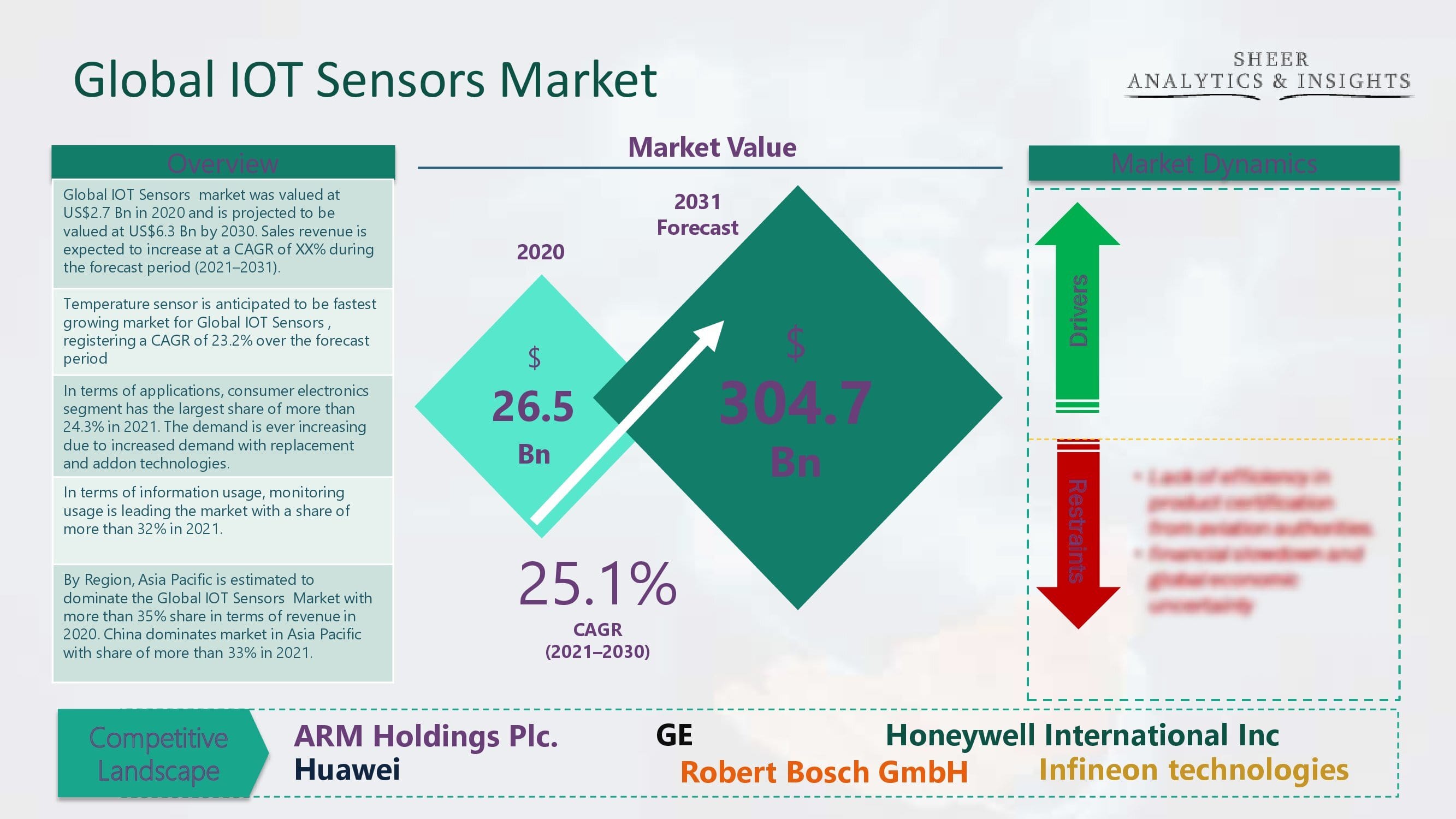 IOT Sensors are generally paired with application-specific integrated circuits (ASIC), which have limited programming capacity and are hardwired to perform specific applications. In our physical world, more and more objects can now communicate through embedded IOT Sensors, actuators, and tags.

The deployment of IOT Sensors is gaining significant traction in several areas in the automotive industry. IoT is being enabled in the cloud and mobile devices coupled with advancements in big data, artificial intelligence, and predictive analytics.  A swarm of sensors is used in vehicle internals, including air pressure sensors, GPS sensors, the vehicle sped sensor, fire detection sensor, and steering angle sensors. IOT Sensors are aggressively used in the automotive sector for reliability, safety and accuracy. They improve safety and help to meet regulatory compliance standards. With the help of these sensors, real-time data streaming is possible. The automotive sector has recognized the need for connectivity and becomes smarter by pairing up with other cars, smartphones, etc. By 2021, the rapid rise of smartphones and the near ubiquity of mobiles prompted infotainment applications in vehicles. Smartphones are equipped with sensors as IOT Sensors such as gyroscopes, accelerometers, GPS and proximity sensors. By docking the smartphone to the vehicle, data from these sensors are used for detecting driving patterns such as sudden acceleration, sharp turns, speeding, hard braking and drifting.

Sensors based on micro-electromechanical systems are being deployed widely for IoT applications. In IoT applications such as smart cities, homes, vehicles and buildings, MEMS form a sensing cluster around the application processor and feed it with every sensory change. The data is then processed by using algorithms so that machines or humans can react appropriately. Increasing innovations in higher performance, lower cost, smaller and more robust IOT Sensors continue to spur the demand for these sensors and the systems they are deployed. The established MEMS-based IOT Sensors are being adopted widely into diverse application areas. The major application areas of these sensors include automotive, building & home automation, consumer electronics, healthcare, industrial, retail, safe & security, power & utilities.

IOT Sensors are now used almost everywhere, and now they are closely mimicking human beings. The technology which allows this to happen is” sensor fusion”, which leverages a microcontroller to fuse individual data collected from multiple sensors for getting a more reliable view of the data than using the data from each discrete sensor on its own. Sensor fusion enables context awareness that has great potential for IoT applications.  Context-awareness involves many aspects, including temperature, location, time, orientation, user emotional state, and preferences or identities of people in an environment. Advancements in sensor fusion for remote emotive computing are leading to exciting new applications, including smart healthcare.  The addition of sensor fusion and remote emotive computing dramatically increases the capability of sensing nodes in IoT.

Scope of the Report

The Global IoT Sensors Market Has Been Segmented into: