By region, Asia-Pacific is leading the passive optical network market across the globe.

Fiber-to-the-home deployments are growing for fast access to data such as data, video, voice, and services. In addition, the demand for a high-speed network for residents to access smart systems is also expected to contribute to the market growth across the globe. The rising penetration of electronic governance services, smart grids, and cloud computing are further anticipated to propel the demand for the passive optical network during the forecast period. 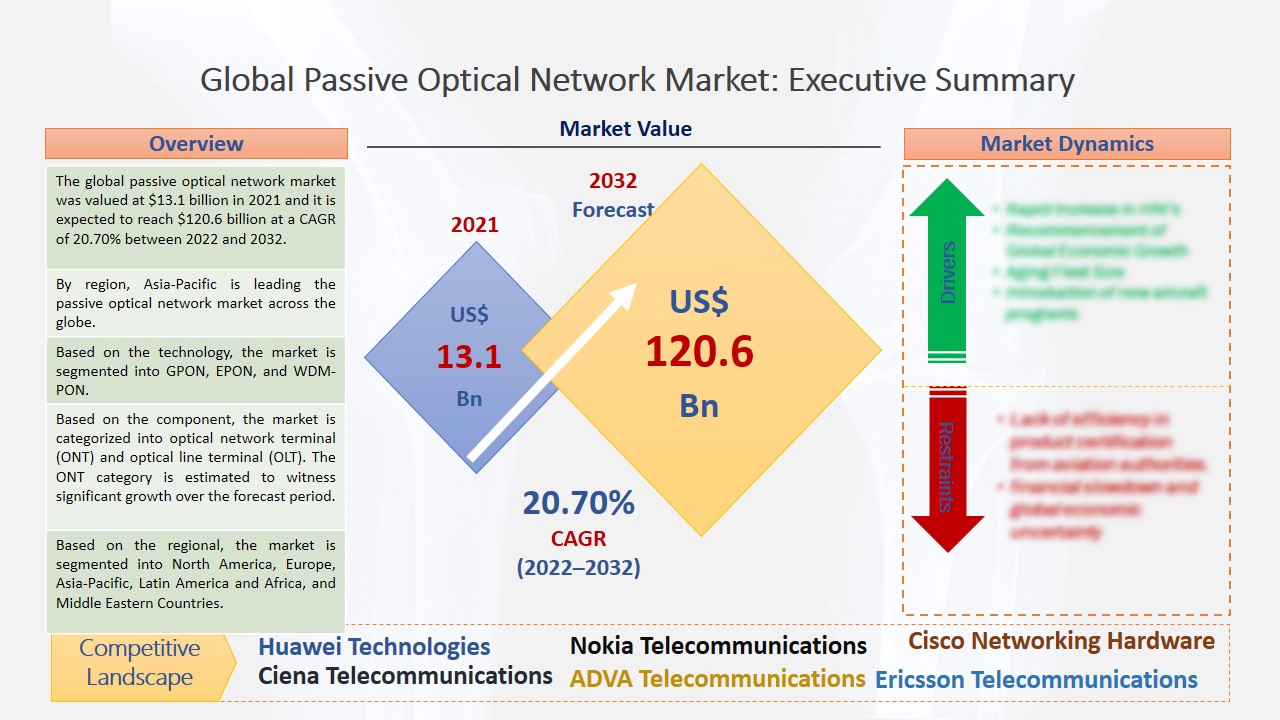 However, less investment at the service provider’s end is expected to hamper the market across several regions due to high capital expenditure. Additionally, the bandwidth of data is not declared to the individual user, which could further delay the transmission speed throughout peak usage times. Based on the technology, the market is segmented into GPON, EPON, and WDM-PON. The gigabyte passive optical network category is expected to hold the largest share across the global market due to its capability to utilize optical wavelength division multiplexing and an individual fiber can be used in both upstream and downstream data. EPON is also expected to drive market growth due to its utilization of Ethernet packets which is the main networking technology.

Based on the component, the market is categorized into optical network terminal (ONT) and optical line terminal (OLT). The ONT category is estimated to witness significant growth over the forecast period. Based on the Application, the passive optical network market is segmented into FTTx and mobile backhaul. The FTTx is a term mainly used for broadband network architecture by using optical fiber deployment. However, the mobile backhaul segment is expected to witness significant growth during the forecast period. This is a solution that is implemented by satellite communication infrastructure. Therefore, the demand for these applications is increasing for customers with high bandwidth.

Based on the regional, the market is segmented into North America, Europe, Asia-Pacific, Latin America and Africa, and Middle Eastern Countries. Among these regions, the Asia-Pacific is leading the market over the last few years. The region is also expected to witness significant market growth throughout the forecast period due to the rising demand for higher bandwidth across several countries such as India, China, Japan, South Korea, and others. The increasing investment and high internet data usage are also anticipated to propel the market growth during the forecast period from 2022 to 2032. However, Europe is another region, which is expected to contribute a significant growth in upcoming years due to government support and increasing financial backup for the passive optical network market.

The Global Passive Optical Network Market Has Been Segmented Into: