The global smartphone chipsets market was valued at $8.6 billion in 2021 and it is expected to reach $50.4 billion at a CAGR of 18.3% between 2022 and 2032. Due to the rising usage of smartphones, and increasing usage of various mobile applications and tools, the market is expected to gain more growth opportunities during the forecast period. Moreover, various key players are focusing on producing innovative chipset products which would benefit the market growth over the upcoming years.

By region, North America has led the global smartphone chipsets market over the past few years.

Smartphone chipsets are used to strengthen mobile devices and other associated devices. The core processing elements of these smartphones are chipsets that can help in the improvement and perform all essential functions in the smartphones. Chipsets are used so users could handle the phone with a better operating system, make phone calls, use the mobile application, and connect the phone to Bluetooth and Wi-Fi. They can store a lot of data and manage power. These benefits and advantages of chipsets are expected to accelerate the growth of the global smartphone chipsets market during the forecast period. Moreover, technologies are becoming advanced every year which plays an essential role in producing more modern or innovative chipset products. Modern technologies such as artificial intelligence, machine learning, and big data among others are estimated to drive the growth of the market during the upcoming years. Thus, it is very much possible for smartphone original equipment manufacturers to produce configurations of chipsets and add additional features to the chipsets as well. Furthermore, chipsets are made up of pieces of material called silicon. Thus, the industry of silicon is also getting more benefits from the growth of the market. 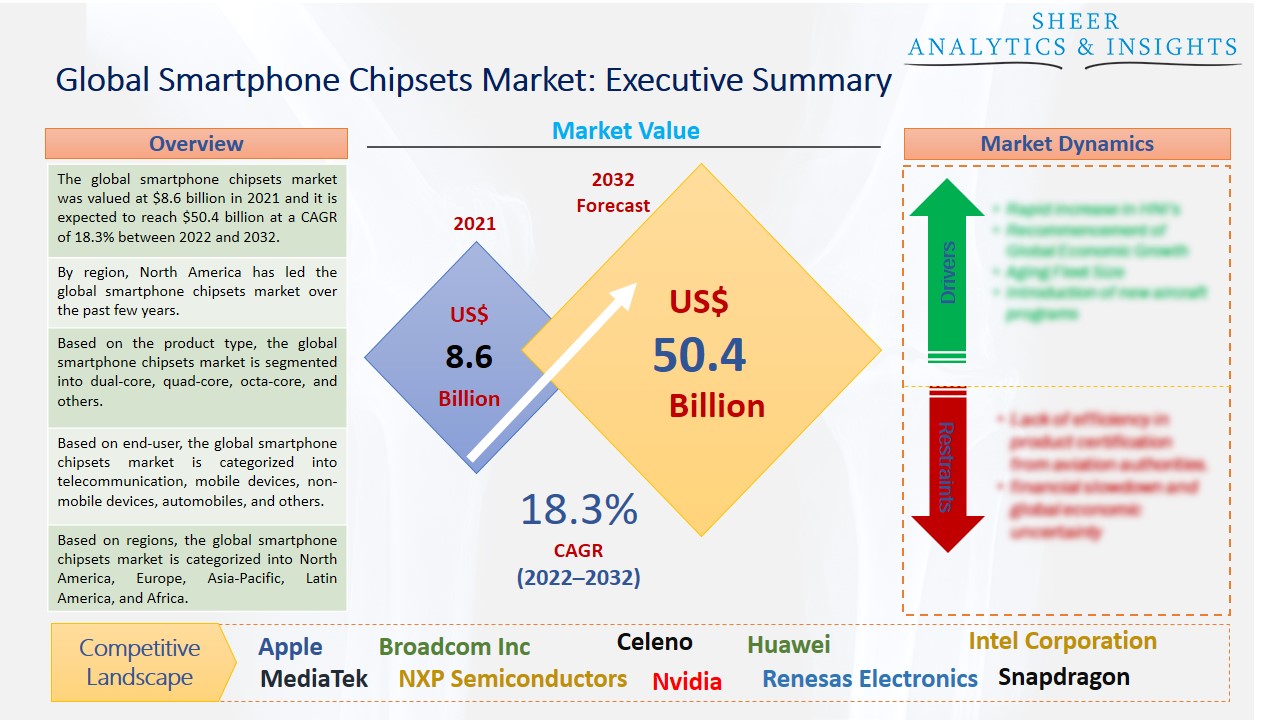 Based on the product type, the global smartphone chipsets market is segmented into dual-core, quad-core, octa-core, and others. Octa-core segment holds the largest share of the market and is anticipated to drive the growth of the market during the forecast period due to its increasing usage among a large number of manufacturing companies. Additionally, octa-core processors are that kind of processing system that have eight cores which are arranged in two sets of four cores each. Hence, these could perform the work as that of a quad-core processing system. Furthermore, this octa-core enables smartphones to carry out more advanced tasks such as handling high-resolution videos and graphic-heavy games without draining the battery, making the devices capable and efficient. It also gives smartphone devices faster load times. Several manufacturing companies are producing innovative octa-core processors so that smartphone companies could use the benefit of these chipsets.

Based on end-user, the global smartphone chipsets market is categorized into telecommunication, mobile devices, non-mobile devices, automobiles, and others. Among these, the automobile segment is accounted for the maximum share of the global smartphone chipsets market. Chipset plays an essential role in the transformation and automobile industries as well as mobile manufacturing companies. It could allow the system, and application developers to develop a wide range of applications. Hence, these are expected to drive the growth of the market during the forecast period. On the other hand, mobile devices are another segment that is also anticipated to boost the market due to the rising usage of mobile or smartphones among a large number of users across the globe.

Based on regions, the global smartphone chipsets market is categorized into North America, Europe, Asia-Pacific, Latin America, and Africa. Among these regions, North America holds the largest share of this market and is anticipated to hold its dominant position over the upcoming years. Most of the market players are situated in this region. These key players are focusing on producing new and innovative chipsets for smartphones and other associated devices. Moreover, these major players are also trying to establish mergers with other manufacturing brands and acquire several subsidiary companies for better products. However, the growth of this market has been driven by increasing developments such as R&D activities, new investments, and partnerships. Therefore, these major factors are estimated to fuel the market growth during the forecast period from 2022 to 2032.

The Global Smartphone Chipsets Market Has Been Segmented Into: