The global web 3.0 market was valued at $1.4 billion in 2021 and it is expected to reach $50.9 billion at a CAGR of 35.4% between 2022 and 2032. To make the vast amount of data on the Internet more useful and pertinent for customers, Web 3.0 proposes to combine it. The expansion can be ascribed to the increasing desire for data privacy through Web 3.0's decentralized identity and the development of the internet's technology. Additionally anticipated to contribute to the expansion is the quick rise in popularity of digital assets like cryptocurrencies and the rollout of 5G and 6G technologies. The expansion of the Web 3.0 blockchain business is also being aided by the rising use of linked devices and better transactional procedures.

By region, the North America dominated the web 3.0 market globally over the last few years.

To increase user scalability and flexibility, many players are concentrating on creating Web 3.0 platforms. For instance, to address the underlying issues with scalability, the cryptocurrency exchange platform WazirX introduced Shardeum in February 2022. Web 3.0 is a better internet in which applications and websites are in charge of processing data in a human-like manner. Blockchain technology is primarily used to create Web 3.0, which is supported by cryptocurrencies. During the forecast period, these product introductions are anticipated to generate attractive growth possibilities for the sector. Moreover, due to advancements in internet technology, other technologies such as machine learning, big data, and decentralized ledgers are anticipated to propel the industry's growth. There are three stages that the internet has gone through in its evolution. The World Wide Web, often known as Web 1, was the very first iteration of the internet. It consisted of static pages joined together by hyperlinks. Due to the early stages of content generation, users had little opportunity to interact with the applications at that time. 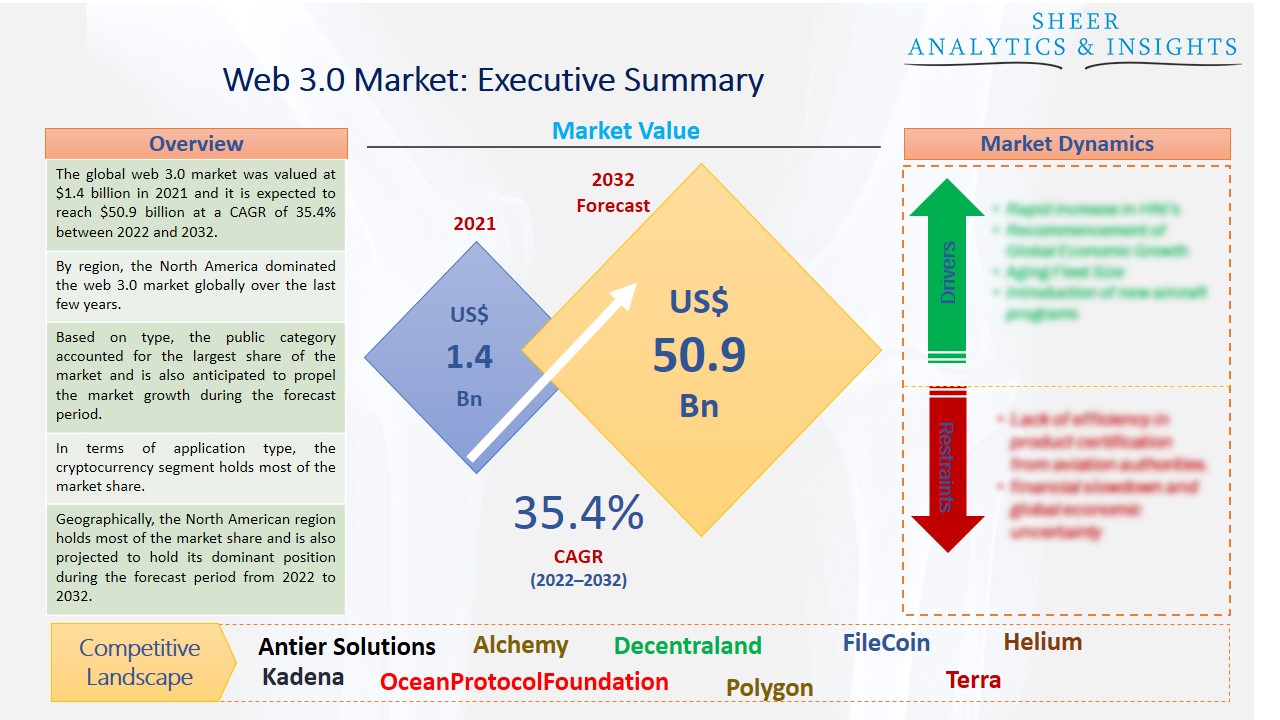 Furthermore, in the last three decades, the internet has advanced significantly. The web has significantly developed to satisfy user needs from the early days of 1.0, when it was largely used for exchanging text-based information, to the present 3.0 era, when users can exchange and interact with rich media content (such as audio, video, and photos). It is difficult to forecast when Web 3.0 will be implemented because it is still in the early phases of release. The transition from 2.0 to 3.0 can take some more time.

In addition, the blockchain's advantages are alluring. It increases customer acceptance because it is simple to use, extremely inexpensive, and far faster than conventional centralized operations. Decentralized networks are praised for being safer by the cyber-security industry because it takes numerous coordinated attempts to compromise a blockchain operation. The industrial sector is being drawn in by the integration of the blockchain with IoT for logistics, supply chains, and production line operations.

Based on type, the public category accounted for the largest share of the market and is also anticipated to propel the market growth during the forecast period. A key aspect influencing the segment's growth is the public blockchain networks' capacity to enable people from all over the world to engage in the network without any limitations. Users from all around the world can sign up to the network, read, publish, and participate in the blockchain in a public blockchain. Most significantly, it helped create a control layer that would sit on top of the existing internet. The control layer now makes it possible for two strangers who don't trust one another to come to agreements and conduct business online. Unexpectedly, the blockchain-based features of web 3.0 would mostly bring backend innovation. On the other hand, the hybrid segment has also led the market with significant growth over the past few years. The hybrid segment's capacity to provide both permission-based and permission less systems are a key reason fueling its expansion.

In terms of application type, the cryptocurrency segment holds most of the market share. Enterprises now have a greater need for high-performance cryptocurrency transaction services as a result of the quick improvements in technical innovation, including digitalization and automation. Therefore, several players around the world are embracing blockchain technology solutions in cryptocurrency to efficiently carry out their transactions to meet the demand for high-performance bitcoin transactions. The aforementioned elements are anticipated to fuel segment expansion.

Geographically, the North American region holds most of the market share and is also projected to hold its dominant position during the forecast period from 2022 to 2032. Most of the key players are located in several countries in North America, which is a plus point for market growth. Additionally, one of the main factors propelling the expansion of the regional industry is the expanding acceptance of Web 3.0 in many operating systems, including blockchain-based systems. However, the Asia-Pacific region is also expected to become the second-fastest growing market in the future due to rising demand and adoption of web 3.0 across several end-user industries. Aiming to re-centralize decentralization and compel the rest of the world to follow its laws, China is quickly overtaking other countries as the global leader in blockchain development. Demand for China's Guangdong free-trade zone to speed up Blockchain development has also just been made by China, which has officially legislated that Blockchain is expected to be the key pillar of its 13th national 5-year plan.

The Global Web 3.0 Market Has Been Segmented Into: